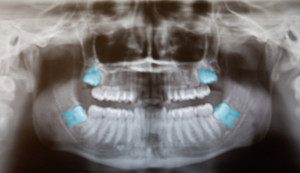 Third molars, or "wisdom teeth", are the teeth furthest back in the mouth.  There is one in each quadrant of your mouth (Upper right, upper left, lower right, lower left). When normal, these teeth usually begin to erupt through the gums during the late teens to early twenties.  If you look into your mouth simply count back from the frontmost, or first molar, past the second molar, to the third and last molar.  In many cases, you will not see it, or only see a portion of it.  If it has not been removed already, it may have never formed or may be delayed in coming in.  However, in many cases, the third molars may be impacted.  Impaction simply means that something is covering the tooth, or the that tooth is angled improperly -  in either case, something is preventing it from eruputing through the gums properly.

Why are they removed so often?

Most third molar removal is done as an elective procedure.  Unless a patient presents with pain eminating from the third molar, the decision of removal versus non-removal comes down to a matter of judgment between the patient and the doctor.  And this judgment is based on the probability that the wisdom teeth will cause a problem in the future balanced against the potential risks of removal.

There are many factors influencing the likelihood of a wisdom tooth causing infection and pain in the future.  Most of the time, the decision is very clear-cut.  Many individuals, especially those of European descent, simply do not have sufficient room in the back of their mouths for another tooth.  Or, the tooth may be rotated horizontally, or wedged behind the second molar. These conditions almost guarantee future problems if not addressed at an early stage.

Most dentists now agree that in these cases early removal during the teen to early twenties, before problems arise, is highly beneficial.  There are several reasons for this rationale: